Wahaca walk outs and the power of social media

Wahaca Walkouts and the power of social media

Love it or hate it, there is no doubt that sometimes the power of social media can be a powerful force for change.

On Saturday 15 June Sarah Hayward had a meal at the Kentish Town branch of the Mexican restaurant Wahaca.

Sarah Hayward is the former leader of Camden Council (2012-2017). She has a verified twitter account, but really doesn't have that many followers in the grand scheme of things (currently at 7,390). (For the sake of comparison Theresa May has more than 862,000 followers and our MD only has 2,784 – please follow her @emmadelthrm

Not only did she tag @Wahaca into her post, she also tagged one of the co-founders, Thomasina Miers. Thomasina has 36.6k followers on twitter. Scroll down to see her original tweet.

She was quick to respond. She said: “We’d like to assure you that this is not our standard policy, only in cases of total negligence will a individual be held accountable, which is very rare. This will not be deducted from the waiter and we will be looking into making sure we have clarity on our policy internally.”

Miers was quick to point out that the waiter had been charged £3 towards the bill by the line manager following the walkout, not the full amount of the bill.

Then Mark Selby, the other co-founder of Wahaca, added: “This has been an internal communications issue, which we’ve now dealt with and resolved. Our policy is in line with industry standards and in no way would an individual be responsible for covering the bill in a situation they had no control over. As a business, we prioritise our staff and do everything we can to ensure our teams are well looked after at work.”

The group’s published policy stated: “In situations of a walk out, whilst the waiter is responsible for the table they will not have to pay any element of the bill. However if the manager suspects that the waiter was complicit in the walk out then there should be a full investigation which will be taken to the operations manager to decide the appropriate action.”

It is hardly surprising that the Wahaca Group have now changed their policy and did it so quickly in the face of the public response.

Let's not forget how precarious the current economic climate is and also that it was only last month that Jamie Oliver's chain of 25 restaurants went into administration, even after Jamie put £4 million of his own money in to try and keep the business afloat. Again, there is a similarity with a story from last year when Miers had to inject £4.7 million into the loss making Wahaca Group (supposedly due to a norovirus outbreak in 2016).

This demonstrates not only the role that social media influencers can play in the public's perception of brand reputation, but also how important it is for a business to act quickly and manage the potential crisis. In the face of overwhelming criticism, Wahaca Group changed their policy. Well done to them for responding quickly and managing the situation robustly.

Don’t let your workplace policies trip up your business or risk your reputation with your customers. Make sure that your policies and procedures are clear and understood by all. Check out our essential staff handbook packages. 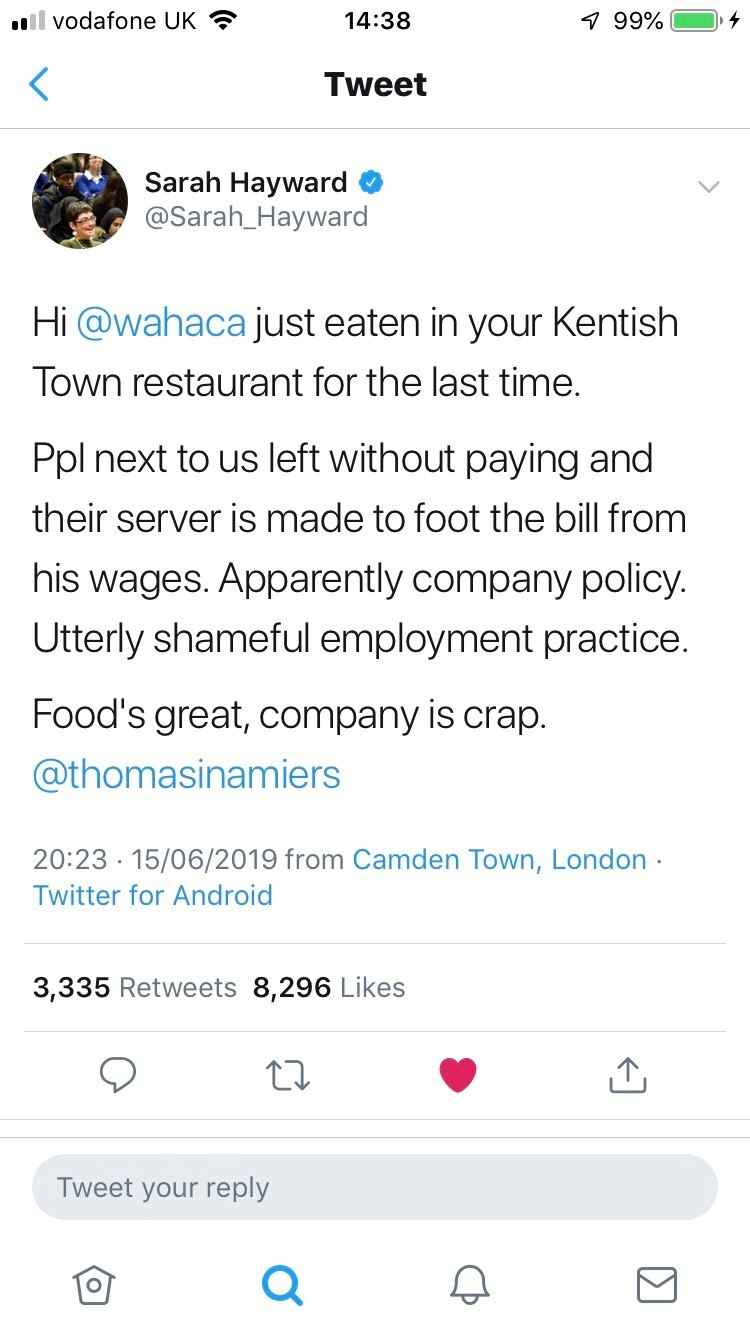